Yaonology has helped you sort out the 5 major economic events that you must know about in the United States even over the World through charts.

The forecast shows that the Fed will increase the Balance Sheet again. However, it’s a little bit different this time. Therefore, the increase in the Balance Sheet this time mainly comes from US Treasury Securities(Brown Line), not MBS(Mortgage-Backed Security)(Black Line) or Reserves. Especially, the Fed continues to reduce the weight of MBS. MBS is a type of bond representing an investment in a pool of real estate loans. In addition, it seems that the treasury market will maintain a low-interest-rate environment. Nevertheless, the real estate mortgage rate might have the pressure to be higher. 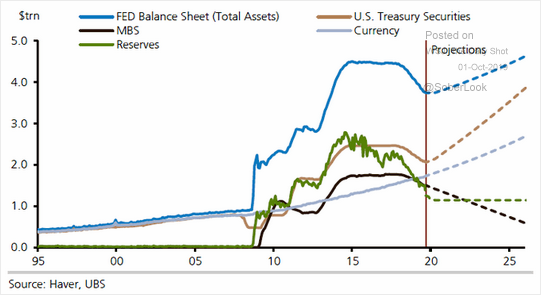 The US ISM Manufacturing PMI dropped to 47.8 in September, (The market was expected PMI to be 50.) and the worst number since 2009. (A PMI over 50 means the growth or expansion in the manufacturing sector, while a PMI under 50 suggests contraction.) Plus, PMI is usually a leading indicator for many economic data, especially in employment data.

Let’s look at PMI details.
The PMI is calculated of equal weights (20%) of the following five primary indexes – New Orders, Production, Employment, Supplier Deliveries, and Inventories. (Blue frame)
Accordingly, Yaonology recommends focussing on production, employment, prices, and exports/imports (Red frame) that get a better understanding of the US economy than PMI figures alone. Furthermore, we can see that production, employment, prices, and exports/imports are all below 50. Therefore, it’s a negative sign for the US economy. Especially, the new export order is only 41, which might be affected by the US-Global Trade war. (Not only US-China Trade War.) 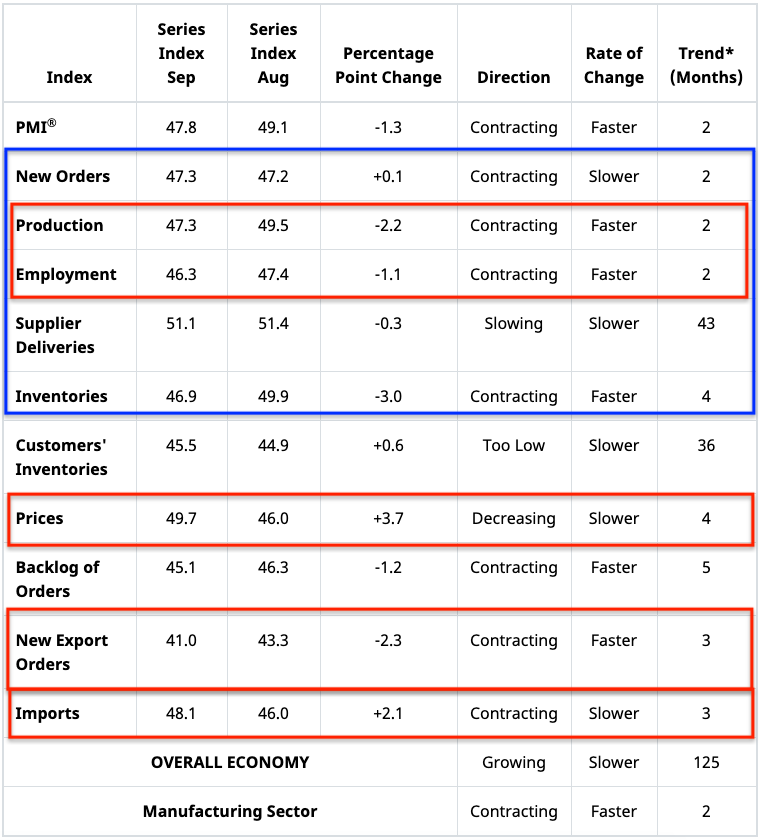 Based on the previous recession, it usually takes 18 months from decreasing ISM PMI 3-month rolling average to recession. Moreover, it looks like there is a recession in 2020 Q1 or Q2. 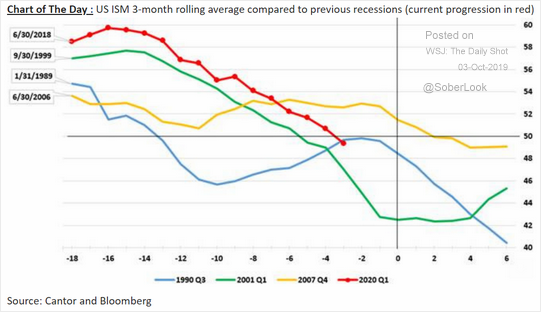 There is around an 80% probability that the Fed will cut rates again in October. 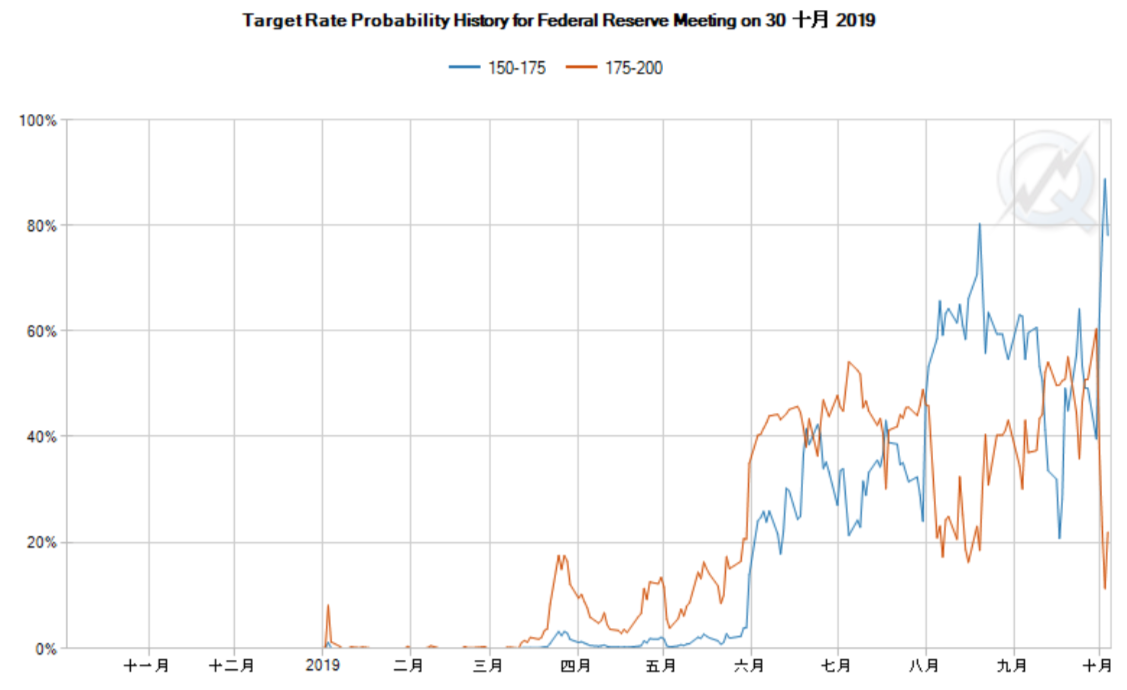 The figure shows that the GDP doesn’t increase after the 2017 Tax Cut. Moreover, the Consumption and Business Investment slightly dropdown, and the only increase is from the Government expense. Basically, the tax cut will reduce the Government income, but the Government increases its expense that will cause the government financial deficit deterioration. 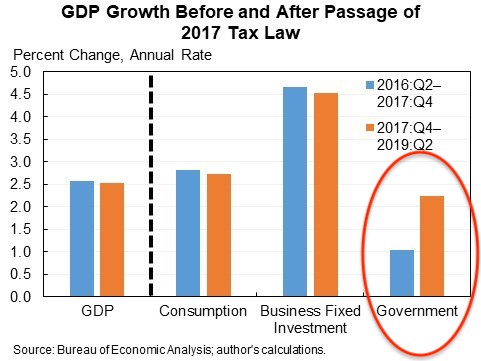 Source: aei.org, AEIdeas ‘Not much’: What macroeconomic data say about the impact of the Tax Cuts and Jobs Act. 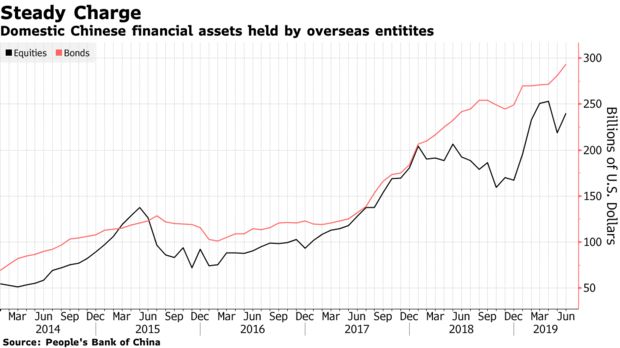 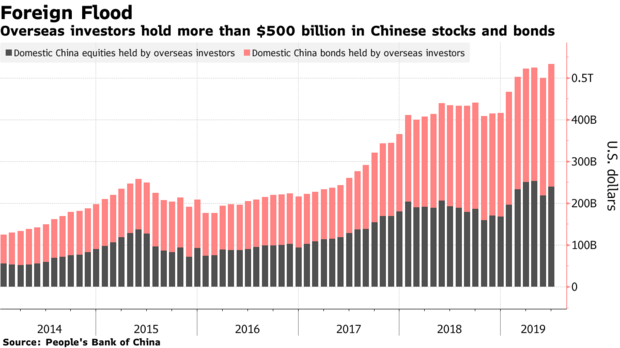 The personal incomes in the Red States grew faster than the Blue States in the past year, especially in Wyoming, Oklahoma, N.Dakota, Alaska.
The 2020 US presidential election is close…. 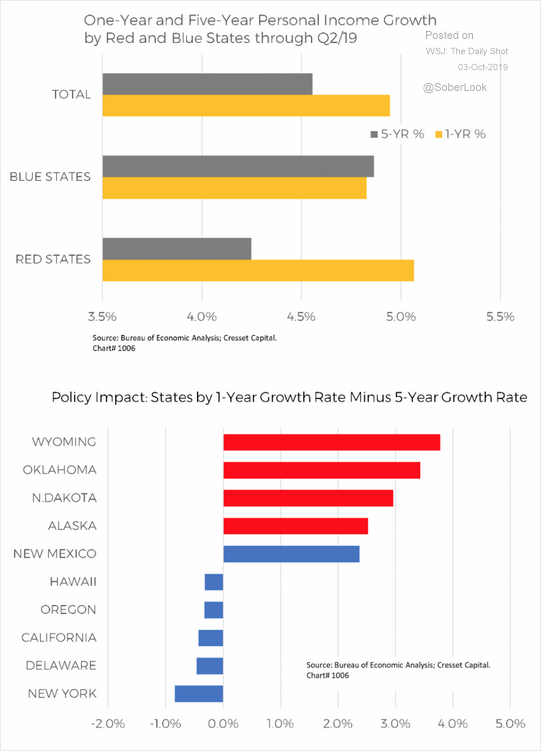 Click here if you want to learn more chart and economic news.

Keep an eye on Yaonology.com and give you the most immediate economic news.